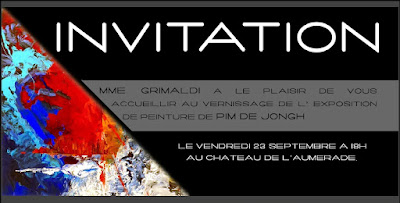 Invitation for the vernissage and exhibition of my new series of paintings. I invite you to be present on 23 September 6pm at the opening while enjoying a drink and a nibble.
The exhibition will last until 15 October

For those of you who are in doubt if they should join the trip to the Turner exhibition in Aix: GO! It will inspire you... Here's a 2012 Aquarellista blogpost about his life... The trip is on 16 September, by comfortable bus and the cost is only 45€ for Hangar members!
Contact Marijke Obbink  marijke.obbink@free.fr to subscribe


William Turner (Joseph Mallord William Turner, 1775 - 1851) was an English watercolourist, a predecessor Aquarellista! In the next post I'll write a bit about his style, in this one more about his life. 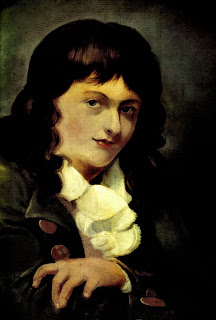 Turner was born into a middle-class family in London. His father was a wig-maker and barber. His mother died while he was quite young. William Turner was sent to live in the countryside with relatives who soon discovered that he was very talented: he painted this castle when he was 10 years old: 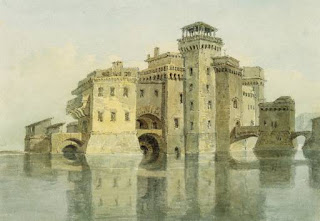 Unbelievable... he could definitely observe...

He joined the Royal Academy of Art at the age of 14 - and, surprise surprise, he excelled. He left London in 1798 "with little more than a borrowed pony and pencils" and started painting a series of landscapes around Wales... 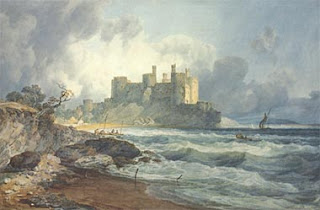 Turner had success and made a fortune when he was quite young. That gave himl the opportunity to innovate freely. 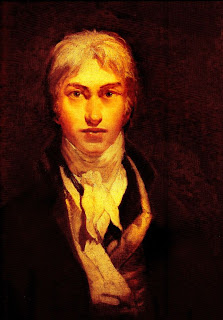 Young William Turner - selfportrait as a bit of a dandy

Turner travelled widely in Europe, starting with France and Switzerland in 1802 and studying in the Louvre in Paris in the same year. 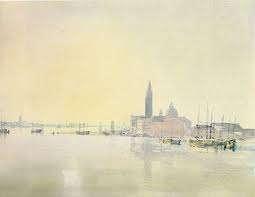 He also made many visits to Venice 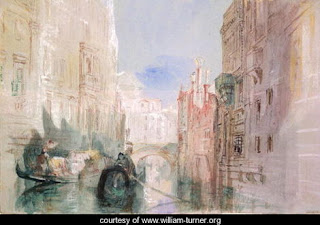 As he grew older, Turner became more eccentric. His paintings changed in style and his audience struggled to understand his vision. He had few close friends except for his father, who lived with him for thirty years, eventually working as his studio assistant. 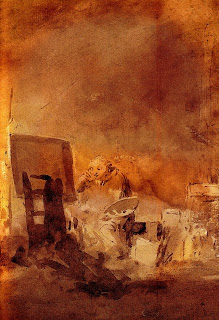 Old William Turner - in his atelier 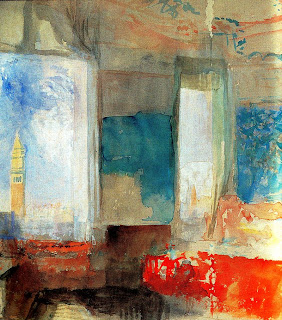 And the atelier once more - look again - and you'll see how impressive  it is... especially if you realize that this was painted in the 19th century!


William Turner died on 19 December 1851 and lies buried in St Paul's Cathedral. He left his money to support what he called "decayed artists". He designed an almshouse for them at Twickenham, with a gallery for some of his works. But some relatives contested the will and part of his fortune was awarded to the family. The rest went to the Royal Academy of Arts who still from time to time award students the Turner Medal...

NB: I have used pictures from the Turner special in the Figaro - to have a look inside, borrow it from me or order via http://www.lefigaro.fr/
Posted by Marina at 11:21 No comments:

For those of you who are in doubt if they should join the trip to the Turner exhibition in Aix: GO! It will inspire you... Here's a 2012 Aquarellista blogpost about his work.. The trip is on 16 September, by comfortable bus and the cost is only 45€ for Hangar members!
Contact Marijke Obbink marijke.obbink@free.fr to subscribe


Turner is known as "the painter of the light" which I think is a very well-deserved title. To me his work was a true inspiration, I remember going to an exhibition of his watercolours in London when I was still in art school. I realized what is possible with aquarelle and it actually made me decide to concentrate more on that medium. 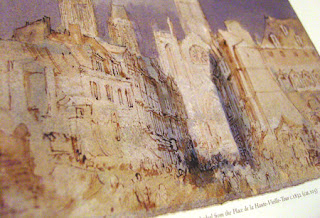 His work is impressionist (although in his time that didn't exist!). In oil as well as watercolours Turner was the first who didn't try to achieve complete realism, but gave that away for atmosphere and emotion.
I read somewhere on the internet  that Constable once said about his work "he seems to paint with tinted steam, so evanescent and airy"... In this day and age we would consider that a compliment! But it was meant as a sneer (compare "Fauvism", now a much loved painting style- but the terminology was first used to degrade the painters as wild animals...) England (the world) wasn't ready for full-blown aquarelle and impressionism yet! 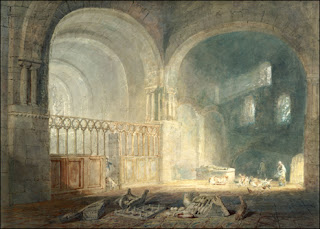 In this aquarelle (Ewenny Priory, in the National Museum of Wales in Cardiff) Turner used perspective and light to achieve a sense of vast space 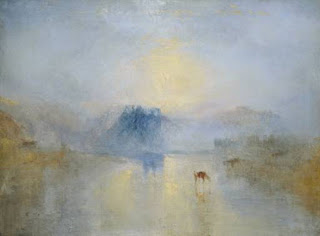 Sunrise, 1845 - Made during the Industrial Revolution: it has been suggested that the pollution might be reflected in Turner's paintings

Turner died 76 years old (a respectable age in those days). From what I found about him he was slightly crazy, but a good person, and we should be thankful that he left us so much fantastic and inspiring work! Like all great modern artists he researched, in his case for possibilities to express atmosphere, emotion, scale, vastness in a painting. He didn't just use watercolours, his oils are also very very impressive, but hey, we're aquarellistas! ﻿Below two more extremely beautiful - and clever - watercolours... 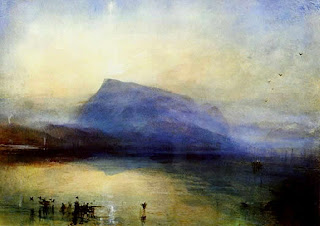 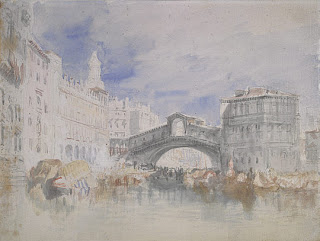