In the summertime the aquarellista's always embark on something we call 'Swapping'...
Basically it is just a lot of fun and meant to 'free us up' but despite the low expectations, the results are sometimes stunning!! As you can see above and below...

The principle of 'swapping' is that everybody creates a background, on a middle- or large sized board, and then chooses a background of somebody else to work further with... This can be repeated more than once (on one of the paintings Cathie did the background, then Beverly worked on it and it is being finished by yours truly - unless somebody else will take it tomorrow)

More to come, because we are not finished! Swapping is best served in the sun - and we have plenty of that here in the South of France!
Other projects, like 'le Village' and 'Roses without Thorns' etc. continued as well, more about them in later posts...
Posted by Marina at 20:22 No comments:

On June 19 the great Hangar Summer fayre was held - and it was an enormous success!! Everybody loved everything, from the stands with produce, brocante and books, via the fabulous BBQ lunch and the fun games, to the disc jockeys and the fantastic artwork by the members, with as a cherry on the cake the Tombola with its great prizes! For those of you who couldn't make it - be sure you check it out next year, 'cause you really missed something!!
DJ's Olivier Dikken and Haley Rogers played wonderful music all day long! We highly recommend them for your party! Hire them while you still can... Contact the Hangar for enquiries...
We'll soon publish a list with all winners! With the fondest thanks and in utter gratitude to Charmian Murley, who was on top of everything that needed to be done! Begging, stealing, borrowing, organizing wellies to be wanged, sewing rats to be splat, can lids to be sjoeled, reminded, painted, drew, postered, stuck, called, mailed, phoned and did hundreds of other spider-in-the-web jobs... She can look back on a very succesful Fayre, that brought in a lot of euro's that will keep our artschool on top!!

Flowers and villages in Aquarelle

Wild Iris by Mieke van Papen with a great use of light...
Last weeks' aquarelle session brought about all kinds of interesting and different results! Mieke, Cathie and Lies worked on their flowers using a combination of wet-in-wet and wet-on-dry techniques
Cathie van der Stel's gorgeous blow up of an orange daisy
Lies Timmermans worked on the wet-in-wet background of her lovely rose. She will complete it in the next session
Ann Edwards painted some tulips and this bird - enlarge it to see the excellent light on his beak, head and back that she drew with pencil, leaving it white and then giving the background in a very light warm yellow wash!
Six aquarellista's will show work with the theme 'Le Village' in an exhibition in September - Brenda Moorhouse is one of them and she worked on images she drew in ink during our Trip to Aiguefonde. She added watercolours to them and made them livelier and sunnier!
'Brassac 1' in watercolours and pen by Brenda Moorhouse
'Brassac 2' in watercolours and pen by Brenda Moorhouse

Edith Alborni diligently worked on her village and it is getting more and more real...

And completely off-topic but oh so great - the dewdrops of Cathie van der Stel that she made for the Summer Fête...
More about the Summer Fayre, a great success by the way, in coming posts, filled with pictures of you!
Posted by Marina at 21:20 No comments:

Exhibition of Neville Moray in Mougins 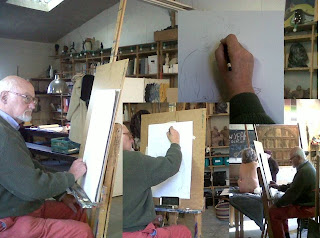 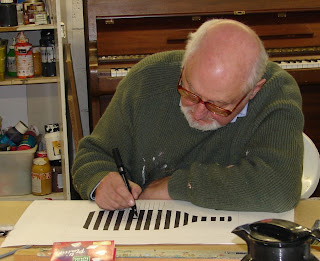 Go have a look, it is definitely worthwhile!
For those of you who would like to see more of his work: visit Neville's website http://www.morayart.com/
He also published in the San Remo Magazine - one of his paintings actually made the front page! 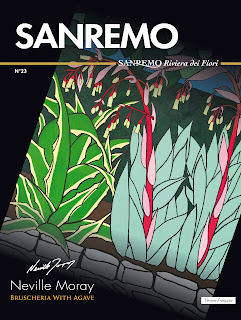 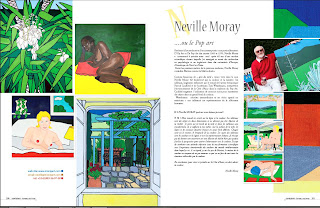 Blow up your watercolours 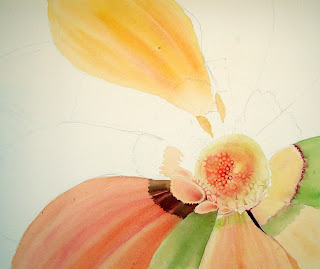 Big Daisy (not yet finished) by Cathie van der Stel
Inspired by the general look of the paintings in the latest 'Splash' book (nr 12), the aquarellista's decided to paint Big and Colourful last Tuesday... It is a shame that you cannot see that the paintings below are actually much bigger than your average watercolours... With the challenges that go with painting big in aquarelle - how do you keep it interesting... But it looks like that worked out pretty well! 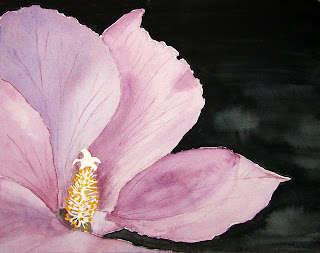 Big Purple Flower by Ann Edwards
Most of the other Blow-Up projects are too unfinished to show - luckily some other interesting pieces were created, as exercises for the Grand Prix d'Aquarelle. The following 3 roses were based on the same example drawing... It's very clear that the personality of the painter adds a lot!! 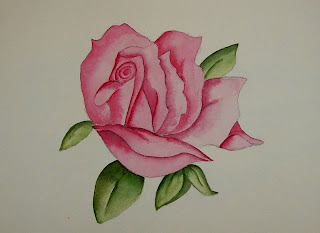 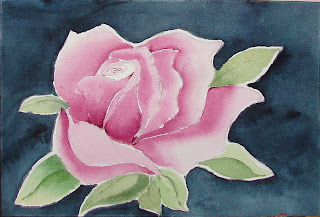 Brenda Moorehouse's version - it will be available for you on the Summer Fayre! 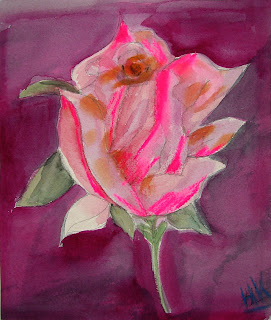 Helen van der Kroft's version - an original  take on the example :)
From 17 - 23 September the Aquarellista's will show their work in Galerie Casablù, with the theme 'Le Village'. Hard work on that theme is also being done by all, here a sneak pre-view of a village scene just started... 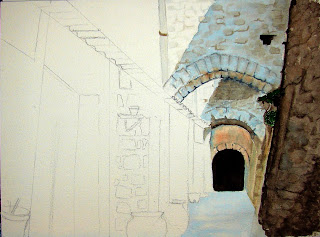 Edith Alborni's Village
And last but not least, Roly Bufton did a next version of his 'Venice', with enormous improvement! Just one more and it will be perfect (and he will be able to teach the technique to us all) 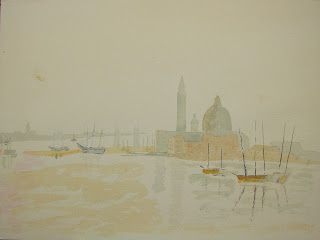 Don't miss the 2011 grand Hangar 'Summer Fayre' on Sunday 19th June starting at midday!!!
We plan a big  party so come with your friends for a BBQ*)  or salad lunch with wine or soft drinks from the bar. Follow lunch with coffee and delicious home-made cakes.
*)It's Father's Day so why not treat Dad to a day out with someone else doing the BBQ?

Get ready for summer with novels in English, Dutch and French plus specialist art books from the Book Sale
Low prices, high quality and all proceeds go to the Hangar so come and support our wonderful art school.
* ENTRANCE FREE * Bring your friends and family  * ENTRANCE FREE *
Don't forget,  SUNDAY, 19TH JUNE FROM 12.00 TO 16.00.   See you there!
Posted by Marina at 14:27 No comments:

Posted by Charmian at 20:09 No comments:

Below are just some of the 100 mini-artworks produced by our members for the 2011 Summer Fayre. Oils, acrylics, watercolours and drawings, they show the high standard of our school. The artworks are now numbered and everyone is invited to buy at least one numbered ticket for 5 euros each - and go home with the corresponding picures! Everyone is a winner!

Posted by Charmian at 20:05 No comments:

The aquarellista group (Tuesday afternoons) strives to create original work - but sometimes we can't help it and let ourselves be inspired by other artists... Couple of weeks ago we watched a documentary with plenty attention for 18th century master-aquarellista William Turner - and then tried to 'work like him'... 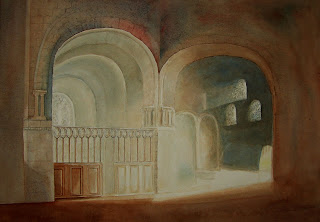 Cathie van der Stel caught the mysterious light-especially the beams through the dusty windows
Most of the group however tried their hand at 'Venice', because it is slightly less complicated and a beautiful, far-away mysterious picture. technically it is iteresting too because it is done in a combination of wet-in-wet and (very) wet on dry technique... Below the results: 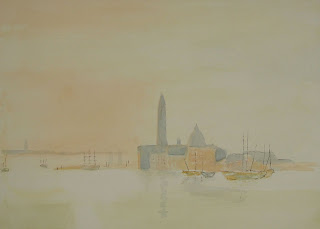 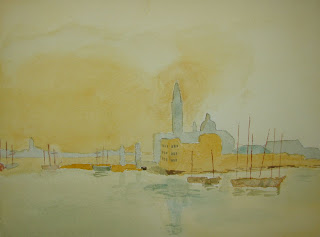 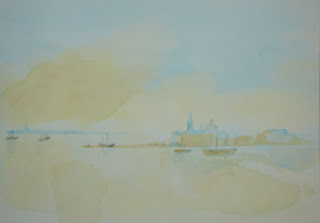 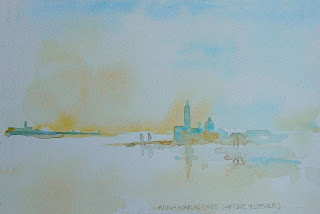 Venice by Anna Karin Fast
We were also very busy with other projects, but I cannot show you much because it's all within the Grand Prix d'Aquarelle - theme 'Roses without thorns' which only admits work that hasn't been published before... Sorry!! After Mid-September we'll have a couple of theme-posts around it...
There was one project finished that had nothing to do with the theme though: 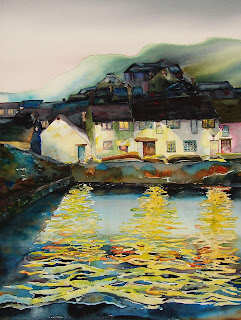 Sandra Seymour-Dale's dusky village!
Posted by Marina at 20:38 No comments:

Work made during live class

On Monday mornings 9.30 - 12.30 Pim and Marina give a drawing class that's either with a live model (Marina) or with 'everything else' from still life to drawing outside with Pim.
Below you see a couple of drawings made in the live class, with our inspiring model Mélisandre. Everybody makes lots and lots of sketches and that is our objective, to develop, observe and practice, we're not doing this to create results - nevertheless, often the drawings are absolute eye candy: 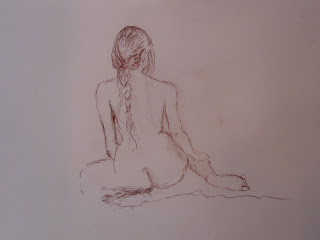 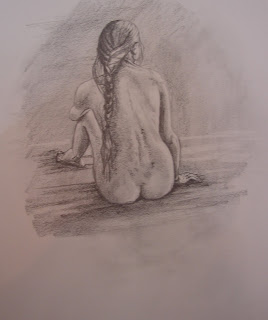 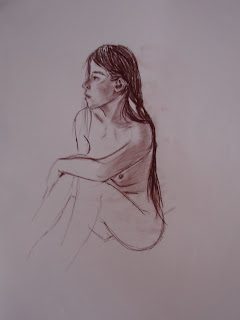 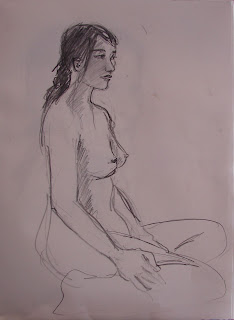 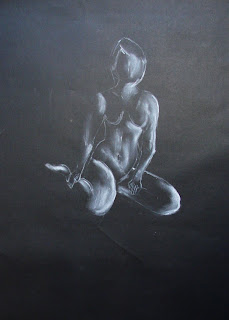 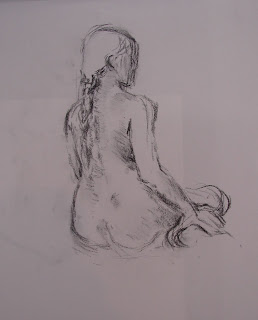 Doesn't that look impressive! If you are interested to give it a try on Monday mornings, just drop Marina an email to participate or subscribe to the 'model starter classes' that are organised from time to time!
Posted by Marina at 14:36 No comments:

When Eugene Rea finally returns to Australia he will take with him wonderful memories in his paintings. Here he has not gone for the grand vistas but instead the quintessentially french road signs, walls and doors so unlike anything in his home country. They are full of texture, quirkiness and memories.

Posted by Charmian at 17:27 No comments:

Posted by Charmian at 17:25 No comments: